Such detail in the design.

This is going to be a spectacular butterfly.

If no one steps on it.

I came this close.

Before a couple shouted.

Alerting me to its magnificence.

So close to my right foot! 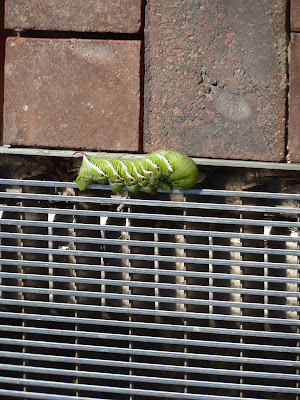 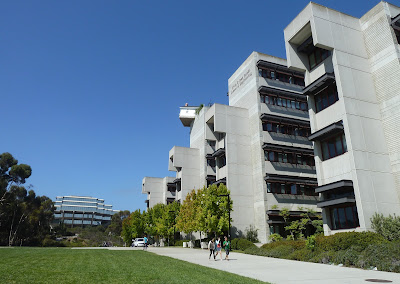 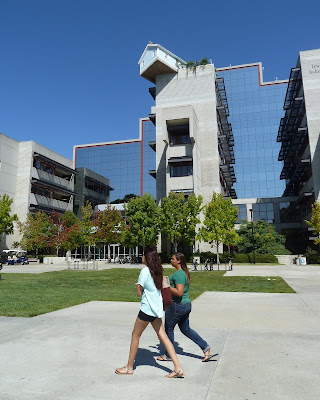 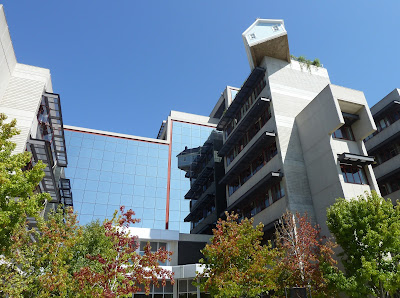 On top of the Jacobs Engineering Building at the University of California, San Diego campus is a house with adjacent garden. 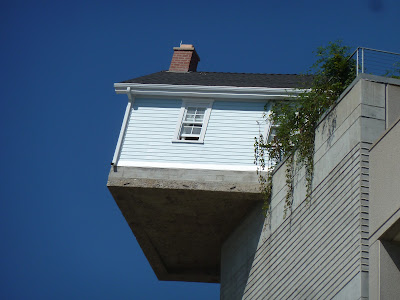 Take the elevator up to the 7th floor. 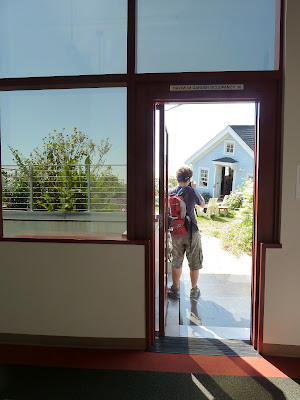 The permanent sculpture is open to the public every Tuesday and Thursday from 11:00 am to 2:00 pm. 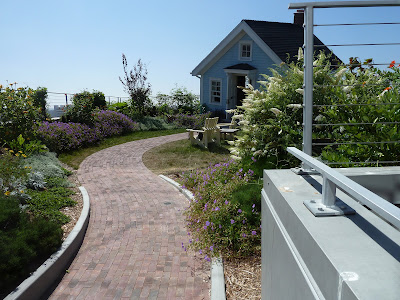 At first glance, it seems to be a quaint cottage surrounded by fragrant flowers and ripening zucchini and pumpkins. 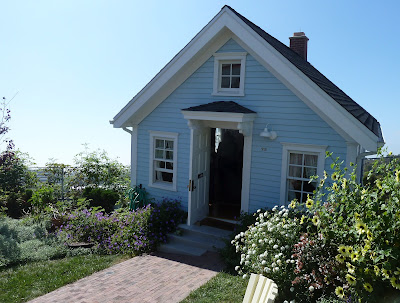 But as a backdrop.

Behind people that are standing upright, it is easy to see that the house is askew. 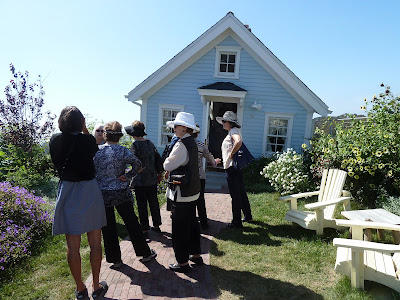 Once inside, it feels weird.

Out the window, you can see the Geisel Library and get your bearings. 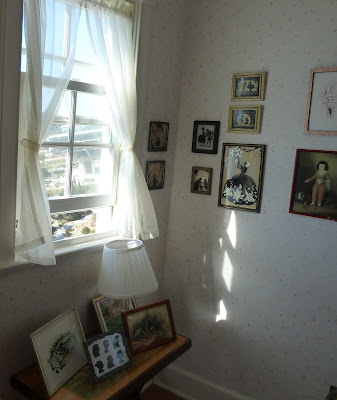 It is not a height thing.

There is no sense that you are in a structure that is perched off the edge of another building. 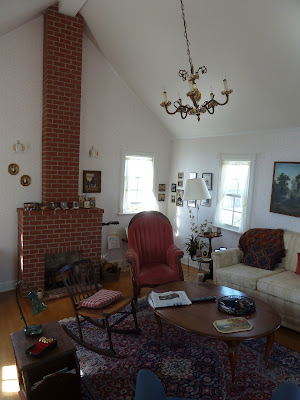 "No it is not a fun house, it is a serious art project," the docent corrected me after I voiced my thoughts. 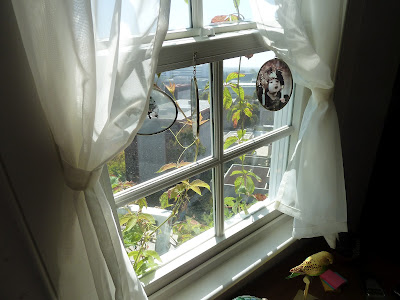 The Fallen Star, by Do Ho Suh, is an exploration of themes around the idea of home, cultural displacement, the perception of our surroundings, and how one constructs a memory of a space.

The artist, originally from Seoul, Korea came to the United States to study.

In 2006, we moved from San Diego to Beijing. Living in China for six months was an incredible experience but I remember feeling discombobulated at times.

You represented that well.

I had the same sensation while walking inside your house.


Years ago, this was a Chart House. 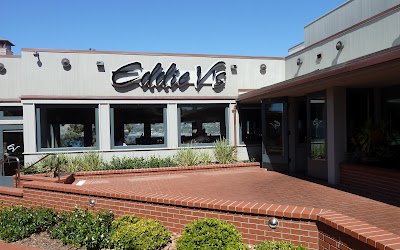 Now it is Eddie V's.


But the restaurant is updated and modern and sleek.

A variety of levels offer indoor and patio seating.

Upstairs there is nightly music in the V-Lounge.

Overheard in the Emergency Room

Assuming that all hospitals are similar, this is the protocol for Emergency Room visits.

First stop, front desk where you briefly explain what brought you in.

Second stop, a more private check-in room where identification and insurance cards are copied and once again you explain what brought you in.

Once your name is called you are guided through heavy doors and allowed to bring along one person.

I was that one person.

Inside cubicles are cordoned off with sliding curtains. It feels private except for the noise of a baby crying loudly down the hall and all the patients in the vicinity explaining what brought them in.

During downtime when the nurse is not taking vital signs and the doctor is not doing a physical exam, one can't help but be drawn into the surrounding drama.

This is one of the conversations that took place next door in cubicle number 10.

Medical Person:  What brought you in today?

Male Patient:  My chest was hurting.

Medical Person:  Is it hurting now?

Medical Person:  When did it start hurting?

Male Patient:  Oh, this has been going on for days and days. My chest will hurt and I will say to myself, "I really need to see a doctor." And then it will stop.  So I don't. And then it happens again. But then it stops. Tonight I thought, "Well I didn't see a doctor so I better just come to the hospital."

Medical Person:  Do you have a doctor?

Medical Person:  Is there any pattern to when you experience these pains. After you have eaten or some other time?

Medical Person:  Are there any other ailments or conditions that I should be aware of?

Medical Person: And that would be?

Male Patient:  I have psoriasis. See, it is right here on my head.

I wondered if this was the third time the gentleman had shared what brought him in given the nature of the emergency room process.

If so, was his story becoming more or less detailed with every repetition?

What I learned Saturday night is that it must take an inordinate amount of patience with your patients to work in the field of emergency care.

But just imagine the collection of stories they have gathered...

Reaching Across the Aisle


Last week I attended an event on civil discourse that was sponsored by the North Country San Diego League of Women Voters.

In big bold letters, they challenged all participants to engage in a dialogue in which each individual has a right to speak and to be heard.

Such dialogue being characterized by:

A healthy reminder, as we approach the November election, to behave.

Have an opinion, support a candidate and voice your thoughts.

During the event, we were shown a film called Patriocracy, which explores the extreme polarization in America.

Pointing out, in sound bite after sound bite, how ridiculous adults can seem when they are vehemently spewing their opinions, getting louder and louder, drowning out logic and reason and good manners.

It was often funny.

In the way that is really more sad than funny, when you think about it.

The guest speaker, a retired Congressman, shared some anecdotes about his time in Washington and the one that resonated with me had to do with the division that starts inside Congress.

He asked if any of us had toured the U.S. Capitol.

Although I have heard the phrase 'reaching across the aisle' many times as it relates to politicians and compromise and bipartisanship, I didn't think about the phrase at face value.

The Congressman explained the division.

The Democrats sit on one side. The Republicans sit on the other. If you need to hang up your jacket in the cloak room, it is not one space for all. It is on one side or the other. Same for leaving the chambers to get a bowl of soup or whatever.

I found this fascinating.

Even those small, simple ones make us 'see' each other.

Let's try to do that in the run up to the election, just 'see' each other and try our hardest to be civil.

The Labor Day holiday falls on the first Monday of September.

Mimosa Mondays are featured at the beautiful Hotel Del Coronado.

Upon entering the spa facility, we were handed our beverage, given a tour and lead into his and her relaxation rooms to....well, relax and sip our drink prior to our facials.

I went for the BE ORGANIC (which involved cleansers and oscillating brushes and enzymes) and convinced my loving spouse that the COMMANDER-IN-CHIEF was super manly and beneficial for his skin.

The bonus was an infinity pool.

And spa guests could stay ALL DAY!

After almost 5 hours at the spa (the majority of that time submerged in the crystal clear cool water) I was convinced (by a hungry spouse) that it was time to get out.

We took the advice of my aesthetician and walked down Orange Avenue in search of Leroy's.

They offer an extensive cocktail menu and a long list of craft beers on tap.

This fancy thing was parked out front. 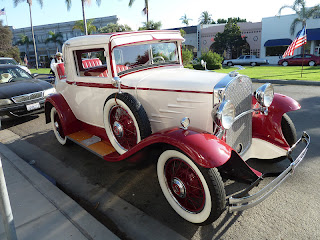 And we passed this cheeky message down the street. 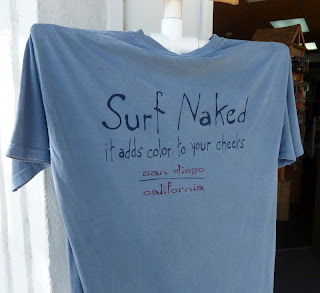 Super cleansed faces, ultra-hydrated (one might say prune-y) skin from hours in the pool, tasty food and a lot of sunshine....

Get yourself to the island.

Preferably on a Monday. 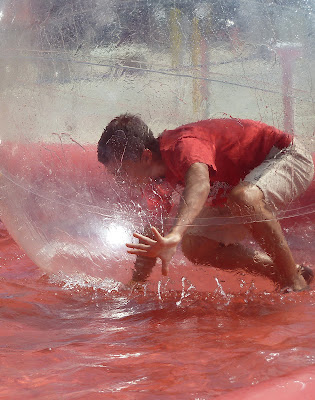 There was a time when you couldn't swing a stick at a fair or a child's birthday party without hitting a bounce house.

But this weekend I saw a new form of entertainment called Bubble Fun.


Can you walk on water? 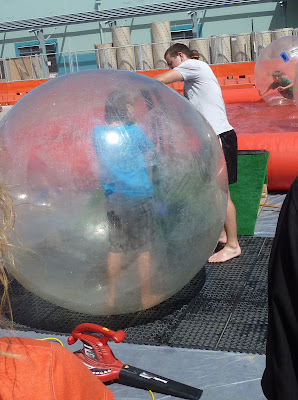 One steps into a large bubble ball that is zipped up, inflated (there is enough air to last 30-60 minutes depending on your size), pushed up a ramp and launched into a pool of water.

Child flails around inside.

Much to the amusement of the crowd.

Email ThisBlogThis!Share to TwitterShare to FacebookShare to Pinterest
Labels: Bubble Fun, Can you walk on water?

Sand Sculptures on the Pier


Side by side in La Jolla. 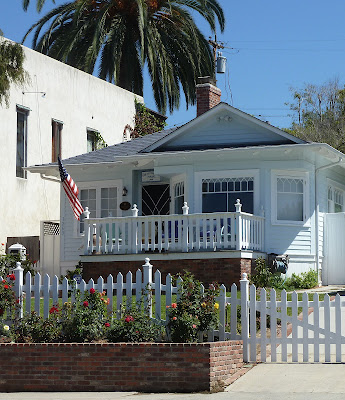 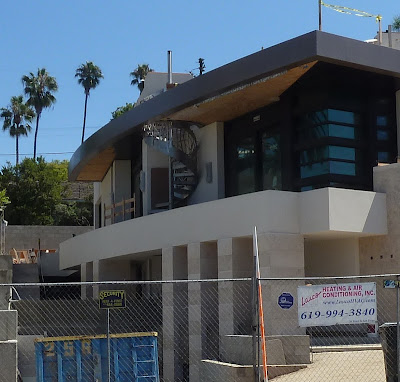 At first glance, the next door 'neighbors' don't seem to have much in common.

However, they are both attractive. 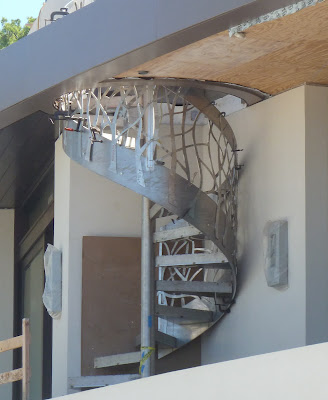 And attention is given to the architectural details. 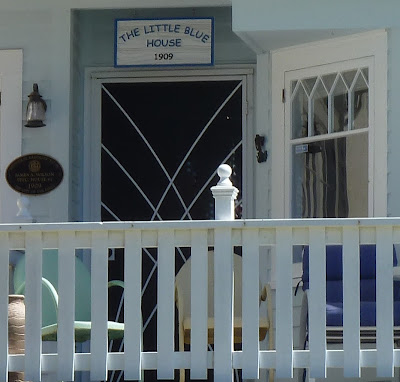 My taste runs somewhere in the middle.