Do you look forward to Girl Scout cookie season?

Or is your first impulse to grab a box of Samoas (Caramel deLites)?

If so, I ran across this recipe for a Samoa Tartlet.

This will do until cookie season rolls around again in 2014!

It opened at the end of September.

Shiny and massive and modern and a bit concrete-y (but in a good way). 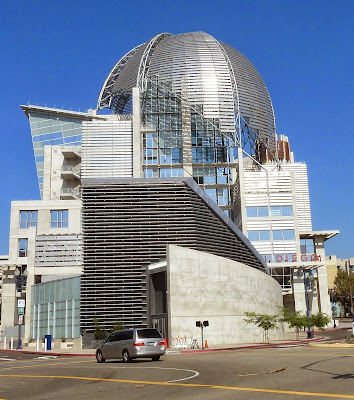 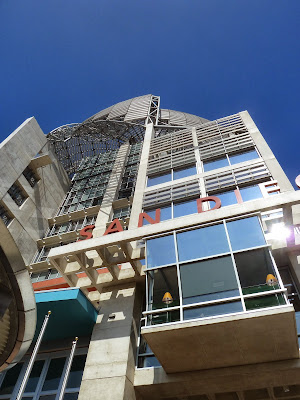 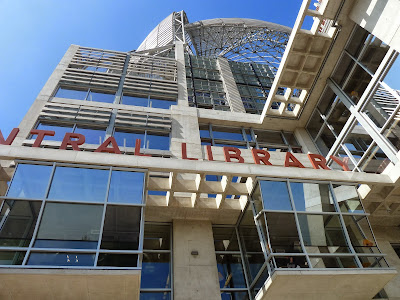 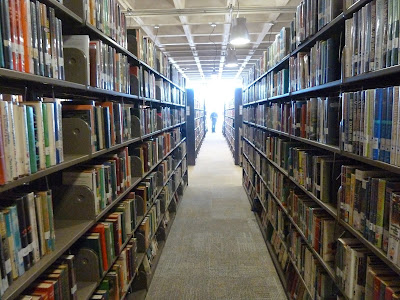 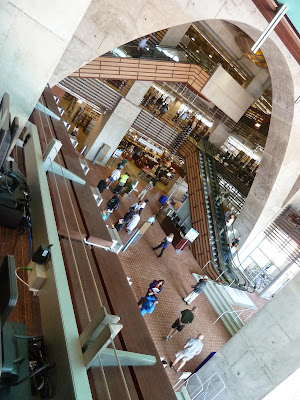 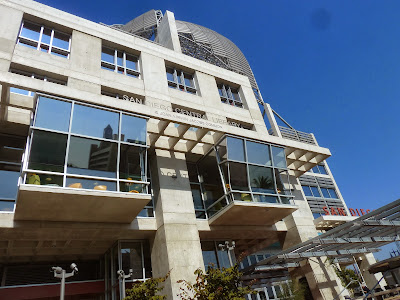 Asked some questions at the reference desk.

"No, we do not have audiotapes to learn Finnish. That would be like learning Swahili. And we don't have that either."

Checked out some new bestsellers at the kiosk...

Wish they had more than two elevators as the wait was forever so never made it past the 4th floor.

Side Note:  The gentleman at the reference desk downtown was able to track down two sets of Beginning Finnish audiotapes at my local branch library. Go figure. Stopped there on my way home and the librarian said they have been out of circulation, as in not checked out, for two years and she wasn't able to find them on the shelves. She will call me back when she is able to locate. Probably shouldn't hold my breath.


I have roasted cauliflower flowerettes, sprinkled with olive oil and cumin in a hot oven.

But these are single vegetables in a single layer on a single sheet pan resulting in a browned caramelized tasty nugget.

Which is how I have always roasted vegetables.

I was searching the internets and I found a recipe for:

...which made me wonder if they were any good.

Exclamation points can be deceiving.

So I chopped up a bunch of vegetables (I used the selection pictured above) into somewhat small pieces and made sure that the onion was sliced thinly. 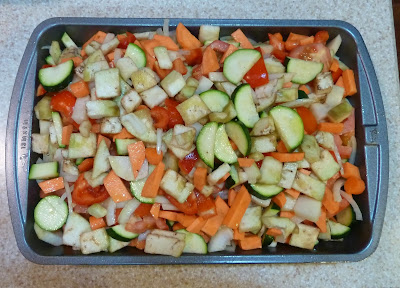 Baked at 375 degrees for over an hour, tossing the vegetables twice during the cooking process and tasting until I liked the 'doneness' factor.

This is the end result. 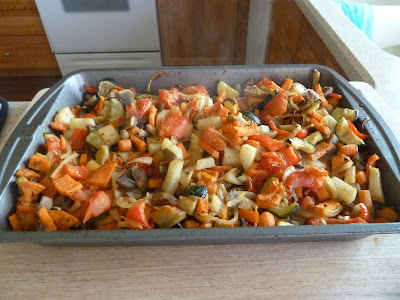 It might seem like an odd combination but it was quite tasty and can be eaten as a side dish or when you just feel like a big bowl of vegetables for dinner.

Two days later I incorporated the leftovers into enchiladas:  dip a tortilla into enchilada sauce, spoon roasted vegetables onto tortilla, sprinkle cheddar and jack cheese on top, then roll up and place into baking dish. Bake in a 350 degree oven for 30 minutes.

Wandered through the massive pumpkin patch, checked out scarecrows, visited the Farmer's Daughter retail shop to try on fascinators (a feathery spider topper, a little pumpkin hat perched high above a headband, veiled witchy look with tiny tiara was my favorite), sat on a hay bale under a tree to lick a homemade coconut ice cream cone and watched little kids swing from a climbing wall.

This was our first trip to Bates Nut Farm. 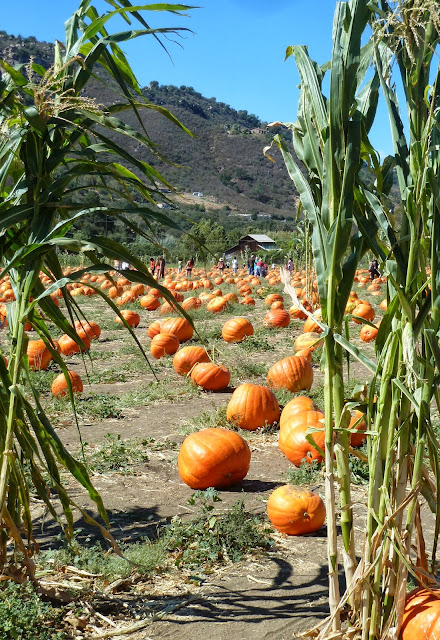 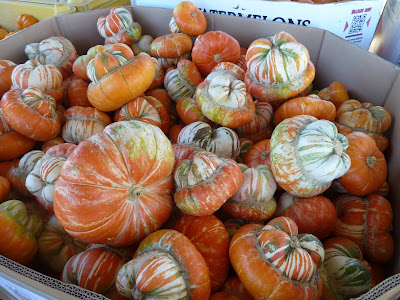 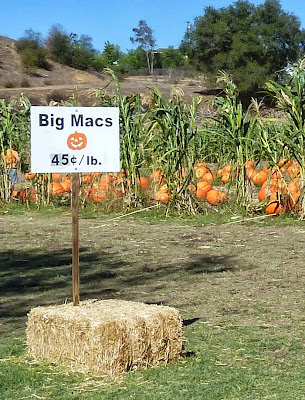 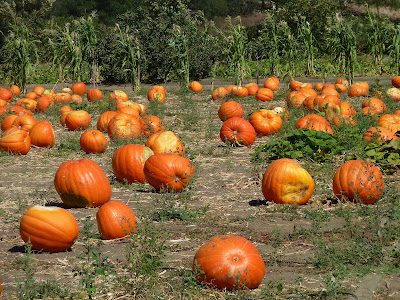 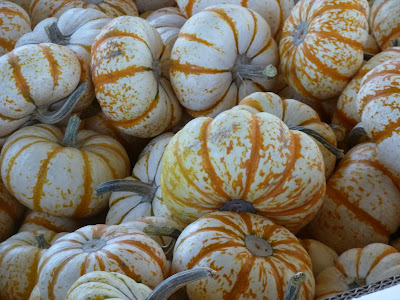 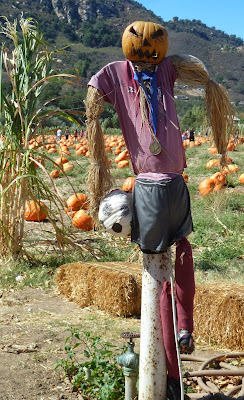 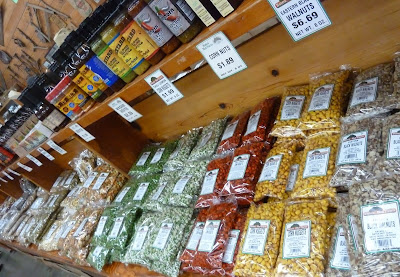 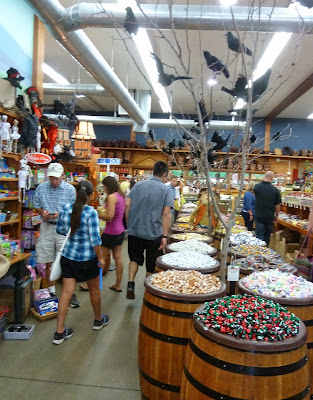 
Spent yesterday a little out of my element.

Surrounded by colorful squeak toys, a water bowl and a half-empty bag of treats.

And this little gal. 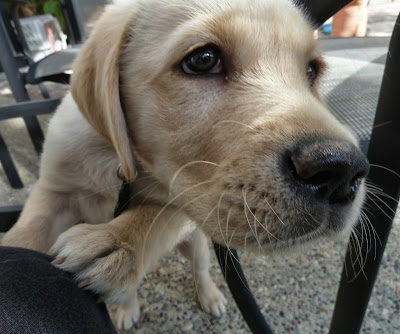 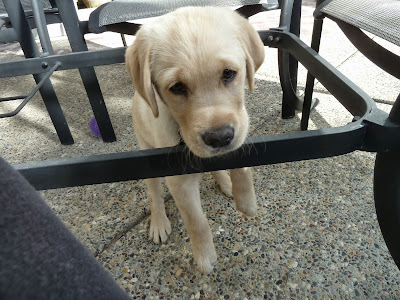 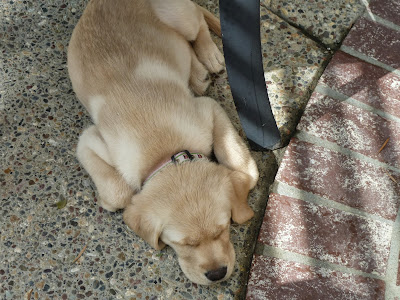 Right now she is ALL puppy.

Excited about the wind, a leaf on the ground, dangling shoe laces.

But she has big responsibilities ahead and a lovely family of four to help her get there.

This sweet little pup is being trained as a service animal!

But first there are holes to dig, snails to sniff, toes to lick....simple pleasures.