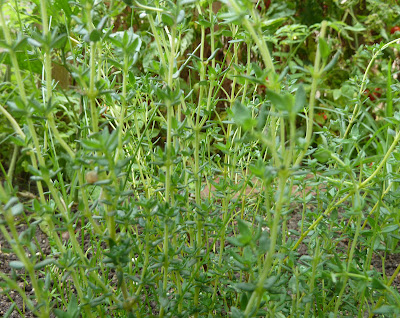 A light herb that works well in soup, marinades, casseroles, sprinkled on fish or chicken, whisked into batter for bread or scrambled eggs.

It can be dried or stored in the freezer.

An herb that makes a tasty compound butter that can be used on corn or steak or scallops.

But I wanted to celebrate my fresh thyme from the garden by making something unusual - a pairing that hadn't been tried (at least by me).

And I found this recipe for a breakfast sundae.


Compliments of Joy the Baker!

I Think Barbra Would Approve

I read in a magazine article or heard in a television interview, can't remember which, that Barbra Streisand likes to match the exterior of her home (flowers and other landscaping) with the interior so that the colors are harmonious.

Does that seem odd? 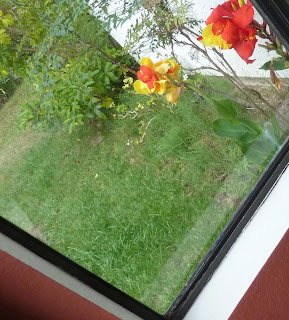 Every time this bloom pops up, I love how it complements the red we painted our dining room walls.

Reminding me of New England in the Fall.


Along Camino del Mar, this Peruvian restaurant is charming.

Honestly, can't remember when I had such an unusual combination that was so tasty.

Must come back and check out their ceviche bar.

I scream
You scream
We all scream

Jeni's Splendid Ice Creams at Home - a recipe book like no other! 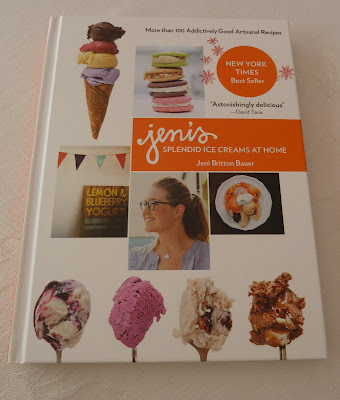 It has been unusually hot here in San Diego.

We don't have air conditioning so instead we turn on the ice cream maker, full blast and keep it churning out cold concoctions to help beat the heat.

So far, according to our house guests, the favorite is Bourbon Ice Cream with Toasted Buttered Pecans, the very first recipe I tried from Jeni's book.

Her recipes call for a bit of cream cheese. Sounds odd. But it might be her secret ingredient.

Decided to test that theory.

Last night we made Salty Caramel Ice Cream. From the book. 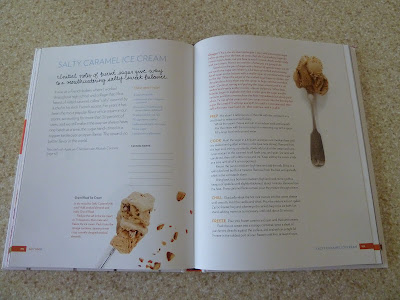 Out of this world.

Used a dry-burn technique, that she spells out in the notes, to caramelize the sugar.

No egg yolks (which is common in most recipes).

But 3 tablespoons of cream cheese. 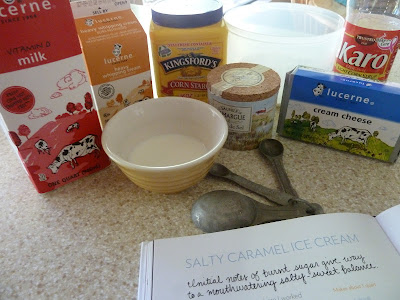 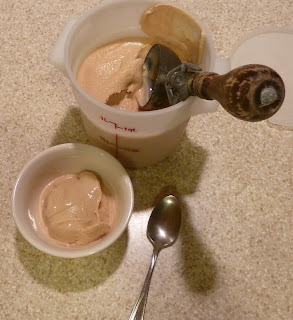 Jeni's recipe for Roasted Strawberry and Buttermilk Ice Cream (not a fan of strawberry ice cream but I think this variation could make me a convert).

I am also fascinated by her pairing of Sweet Corn and Black Raspberry, an ice cream recipe that appears on page 62.

This is a great way to get through a heat wave! 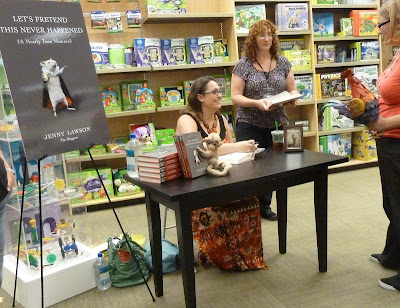 Jenny Lawson, aka The Bloggess, seated at the table, greets fans last night at the Barnes and Noble in Mira Mesa.

This was not an ordinary book signing:

* Three announcements were made stating that this event might not be suitable for children.
Jenny is fond of the F-word. And uses it repeatedly.

* Fans brought chickens.
This was done in homage to Beyonce, the giant metal chicken in Jenny's backyard.

* Seventy-five percent of questions from the audience involved dead animals.
For example,
"I would like to use bats to make a mobile for my baby's room. What do you think?"
Jenny replied, "The wings are quite fragile so I would definitely laminate them first."


Lawson is a best-selling author, blogger, lover of taxidermied animals and is also dealing with a range of mental illness from depression to anxiety and obsessive-compulsive disorder.

On tour right now, she is touting her mostly true memoir titled Let's Pretend This Never Happened, which took her 11 years to write.

Just as funny in person as she is on the page, Jenny had the audience bent over laughing as she regaled us with a chapter in her book about using laxatives to clean out her toxins so that her anti-depressants would work better and she could lose three pounds without working out.

She was later asked if she has considered stand-up comedy.

Unfortunately for us, the thought of it scares her to death.

The hundreds that attended last night were let in on a bit of news.

Jenny is probably going to name her pegasus "Flyza Minnelli".

More importantly, she has submitted a proposal for a second book --- "this one will go a bit more into the darker side of mental illness".

Light or serious, this gal is hysterical!

Blues at the Bay

Rules posted outside the venue.

The backdrop is sailboats and palm trees.

They need quality acts or no one would bother glancing at the stage, the setting is that gorgeous.

Last Thursday was a rousing night of blues, starting with an hour and a half of Jonny Lang. I lost count of the number of times he switched out guitars.

Such a great performance that it was easy to forget he wasn't the main attraction.

It was Buddy Guy.

Do you know him? Have you heard him live? Been to his blues bar in Chicago, Legends?


I've been all around the world, everywhere is home
Drink wine with kings and the Rolling Stones
I got a few scars from the battles I won
'Cause I'm 76 years young

In the middle of his set, he introduced a 13-year old.

The kid grabbed the mike and asked if we had ever heard of 'Jimi Hendrix'? And then he played and sang and played some more. Had the audience on their feet.

I don't think Buddy is quite ready to pass the baton, as evidenced by his energy, voice and the fun he was having but it's nice to see that he is grooming the younger set.

Went outside this morning to check on the garden. 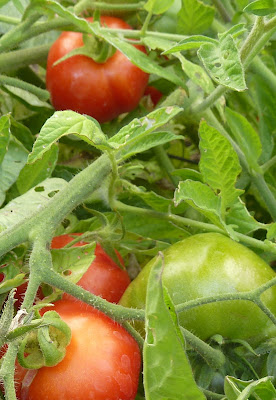 And this is what I found. 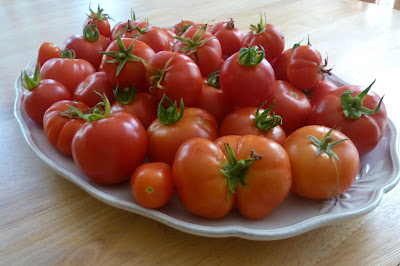 We have been picking and eating vine-ripened tomatoes all summer long.

On burgers, in pico de gallo and most of all on salads. 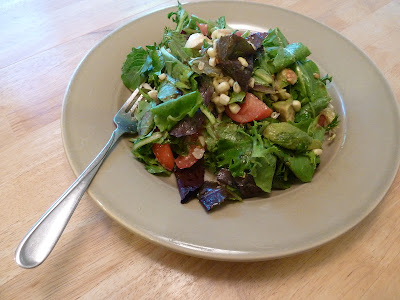 Mixed greens, grilled corn sliced off the cob, mozzarella cubes, avocado slices and a splash of olive oil and balsamic glaze with just a sprinkling of sea salt. 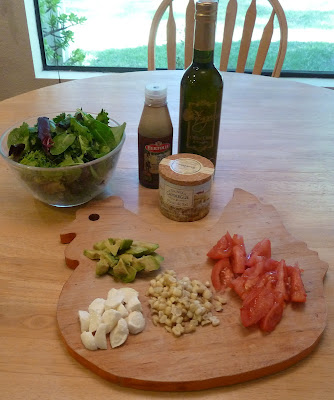 What are you tossing in your summer salads?

Swing by if you need a tomato...

Under the entrance sign to the Gaslamp Quarter, across the street from the convention center, their patio dining is a great place for people-watching. 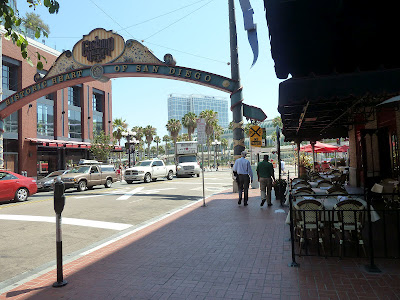 The martini selection ranges from Key Lime Pie (the glass is rimmed with graham cracker crust) to the Maytag (with blue cheese stuffed olives). 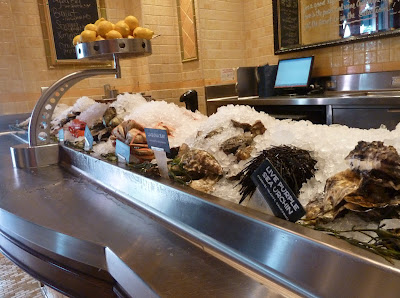 Inside it is all dark wood and white linens.

On the pricey side but a fun experience and good seafood.

Worthy of investing in a year-round parking pass.

But it is certainly fun to branch out.

Especially during the summer.

Tried Seascape in Solana Beach for the first time. Street parking is free. There are showers. 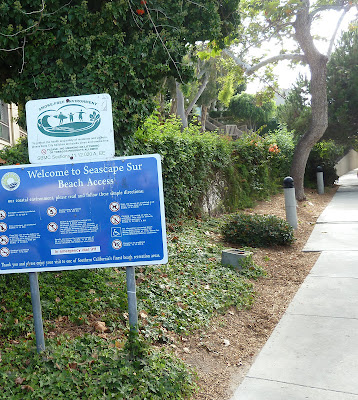 Great view down the wooden stairs. 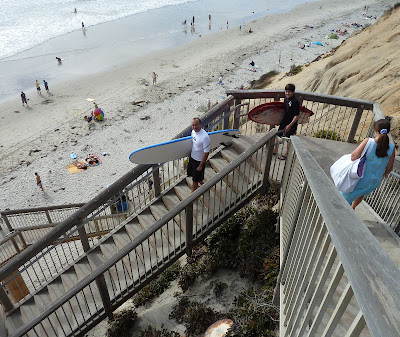 Perfect spot for my brother... 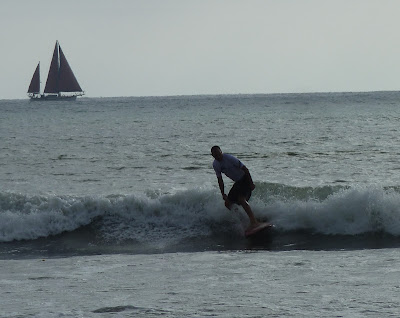 to give my visiting nephew... 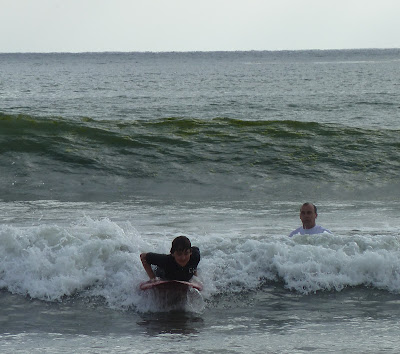 a chance to surf on his custom board!


Made from the following:


Although big slices of juicy watermelon have been a staple at our barbecues this summer, it was fun to mix it up.

The balsamic glaze provides an acidic pop in the sweet watermelon 'shot glass'.

Try it...see if you're amused.