The best holidays end with pie. 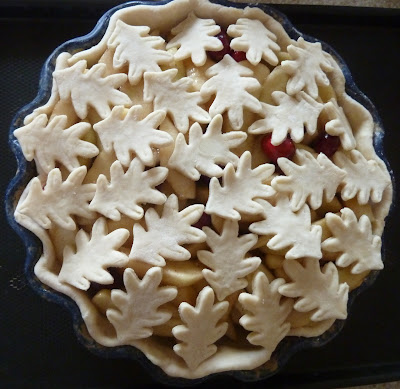 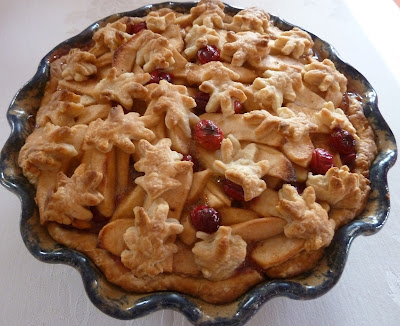 This year we celebrated at my brother's new house which he moved into just a little over a year ago.

He grilled a whole turkey on his outdoor BBQ (a first in our family) and we ate outside under a big tree (another first).

We shared stories and pictures and played scrabble until it started to rain and then promptly moved the party inside.

Hope your holiday was festive and filled with a few firsts!


p.s. Pie recipe can be found HERE. Thanks Joy!

Email ThisBlogThis!Share to TwitterShare to FacebookShare to Pinterest
Labels: celebrating outside in San Diego, grilling a bird, Thanksgiving, Turkey Day 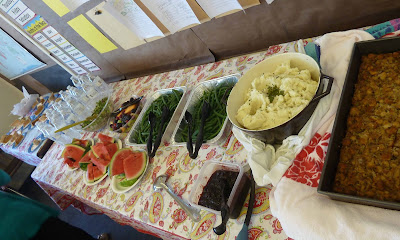 In 2010, I passed a background test and went through a Volunteer Orientation and became involved with the IRC, you can read about the organization HERE.

I bring this up because there is so much talk/debate/fear in the news right now about the subject of refugees.

Prior to my involvement with this organization, I doubt I could rattle off an exact definition.

A refugee is someone who has been forced to flee his or her country because of persecution, war, or violence. A refugee has a well-founded fear of persecution for reasons of race, religion, nationality, political opinion or membership in a particular social group.

As a volunteer, I spend time in a classroom with adults that are learning English and I teach them how to cook healthy dishes, how to spell and pronounce all the words/food items associated with the recipe and then we share a meal.

Every year, we celebrate an American tradition, the Thanksgiving Feast ---- with turkey, gravy, cranberries, beans, stuffing, potatoes and pumpkin pie.

So that is where I was this afternoon.

Sharing and eating and bonding with a group of people that are learning our language, our customs and our traditions.

As I was conversing with a lovely woman from Somalia, I kept thinking that it would be nice if all the folks that are so terrified of refugees could sit down and have some pie in the classroom with us.

Because most of the time fear is just ignorance.

Email ThisBlogThis!Share to TwitterShare to FacebookShare to Pinterest
Labels: International Rescue Committee, refugees in the news, working with refugees

When I was 26 years old I came across an ad in the Los Angeles Times looking for a technical trainer. The software company was based in Boston and needed someone to cover the West Coast.

It caught my eye and I wasn't even job hunting.

This was in the days before Indeed/Monster. This was before the WorldWideWeb. When job prospects were in the NEWSPAPER, not on the Internet.

So I MAILED my resume and cover letter (using a stamp)  to Camex Inc. at 75 Kneeland Street.

And I got the job.

On Day 1, I flew to Boston (my first trip there) and stayed at the FOUR SEASONS HOTEL (yes, that gorgeous high-end hotel chain) for a MONTH. My view was the Boston Public Gardens. Every morning I walked a few blocks (through the theatre district and over to Chinatown) to go through a rigorous training program on the Breeze, the Scanner and the BitCaster.

It changed the course of my life.

I made wonderful friends. I met the man that I would marry. I started traveling, nationally and internationally.

After six months as the West Coast software trainer they asked me to relocate to headquarters.

So I went to LIVE in Massachusetts and bought my first winter coat.

I moved into a condo in the quaint town of Hingham on the South Shore and I took a FERRY BOAT, yes, seriously, a BOAT back and forth to work every day.

In the winter we all huddled below deck to keep warm but in late Spring, Summer and early Fall we gathered on the top deck and sipped wine as we leaned across the railing and watched Boston Harbor disappear from view (this was on the evening trip home as I don't think they served cocktails to the morning commuters).

Earlier this month, my husband, my dear friend Linda that I met on my first day at Camex, and I took a walk down memory lane.

Everything looked exactly the same.

The bar across the street.

So much so that it was almost shocking to step out of the elevator and realize that Camex no longer existed (the company was bought by DuPont ages ago) and what was once the floors that we spent so much time on were now gutted/completely renovated and occupied by medical groups from Tufts.

Boston is an old city with a lot of history (like Paul Revere's House, Faneuil Hall, Old North Church, Granary Burying Ground, etc.) that will be there year after year after year.

Regardless of who moves into 75 Kneeland Street.

A WORD is dead
When it is said,
Some say.

I say it just
Begins to live
That day.

Our guide recited this poem as we started the 45-minute tour of the Emily Dickinson house in Amherst Massachusetts last weekend. 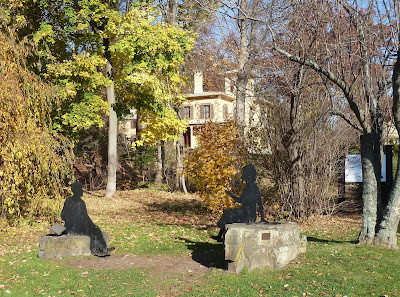 American poet Emily Dickinson (1830-1886) is known for her use of slant-rhyme, unconventional punctuation and reclusive habits.

“The Mind is Smooth – no Motion –
Contented as the Eye (slanted)

Her poems did not have titles. They were not dated.

Fewer than a dozen of her poems were published during her lifetime. After her sister Lavinia discovered the collection of nearly 1800 poems, Dickinson's first volume was published four years after her death.

We learned that Emily dressed in all white, even to garden. A replica of one of her dresses is on display and was fancy enough to get married in!

She baked and filled a basket of treats and dropped it out her bedroom window to share with kids playing outside.

Although she was a homebody, there were acres and acres of land around her family property so she did enjoy nature. 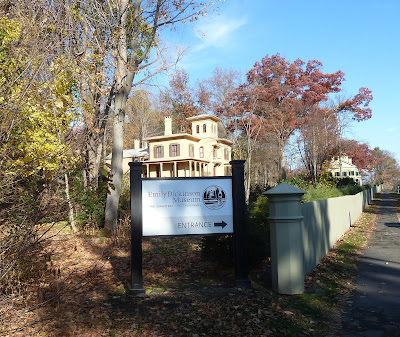 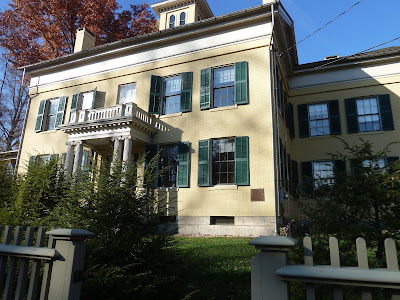 We were told that Emily was buried behind the Mobil station nearby and sure enough that is where we found the cemetery. 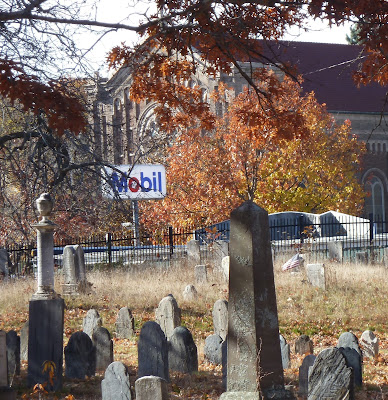 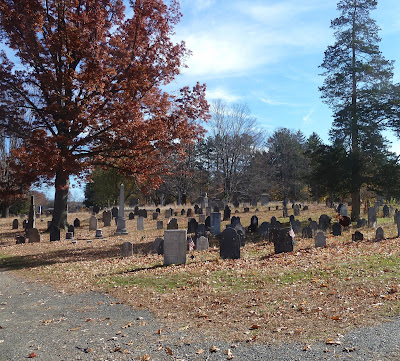 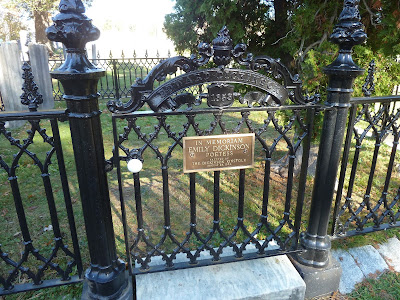 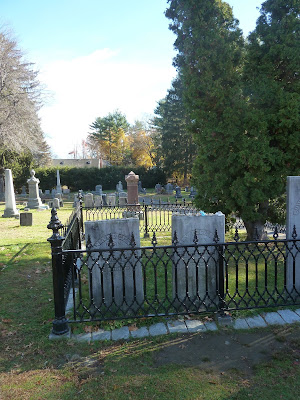 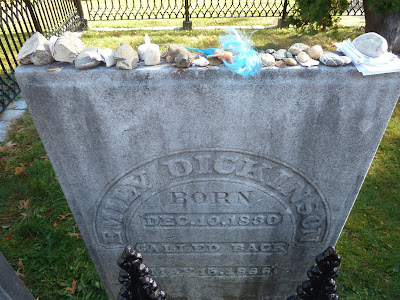 Since we were on the East Coast for Halloween weekend, we expected bare trees and cold weather as this is well past the prime leaf-peeping schedule according to Fall foliage maps and charts of New England.

What an unexpected surprise! 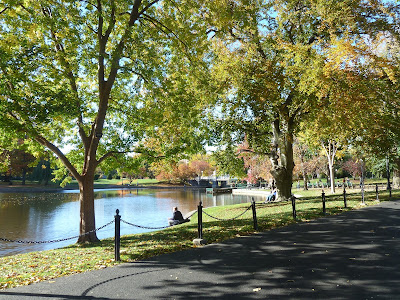 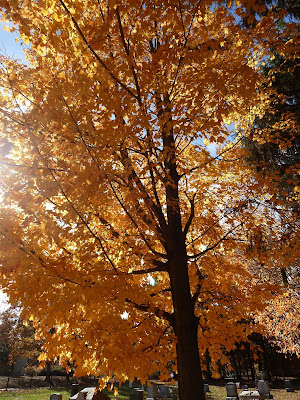 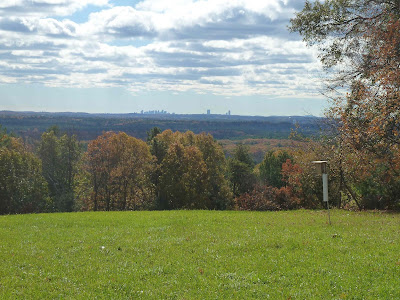 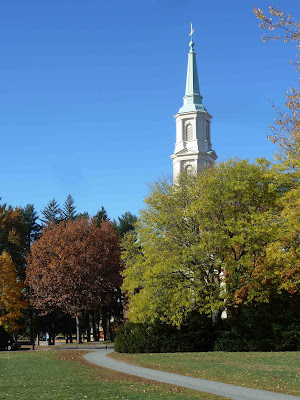 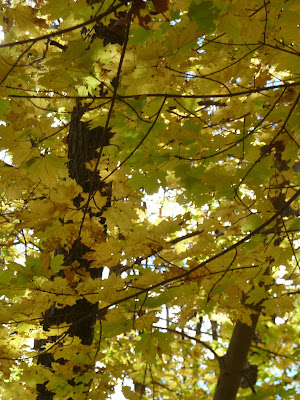 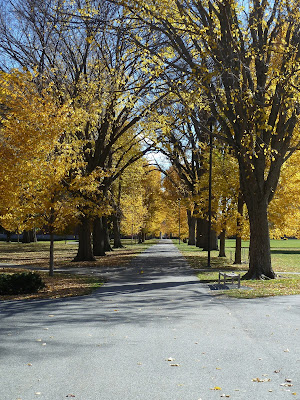 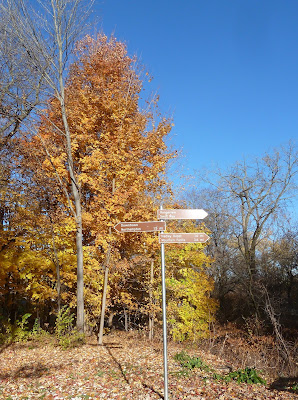 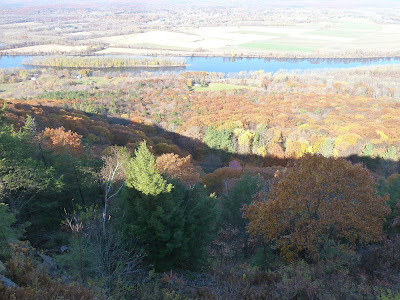 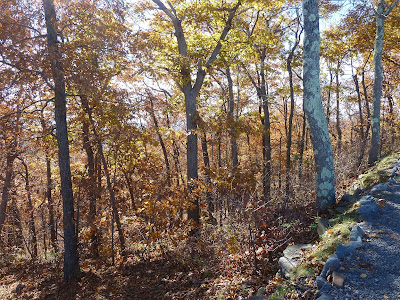 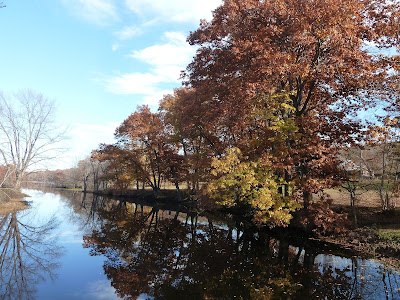